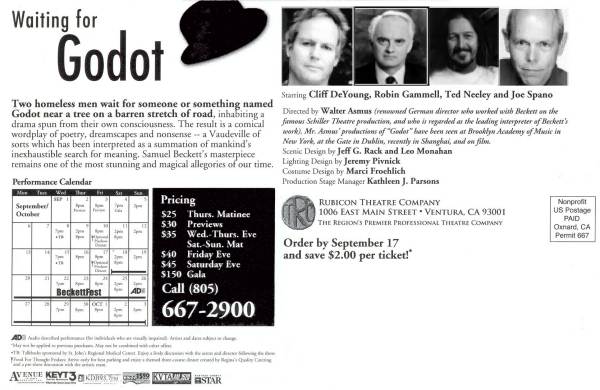 Direction of a Play:   Walter Asmus

For more information, and other RTC nominations, see my RTC page!

It all began on 8/24/04, when I happened to catch Karyl Lynn Burns (RTC's Co-(Producing) Artistic Director/Executive Director) on AOL Instant Messenger (AIM).  This, in itself, was a major miracle, since so many of the RTC staff use her account, anyone could have been online that night!  Karyl Lynn is very familiar with these pages, and informed me that Joseph had contracted pneumonia and had to withdraw from the role of Lucky in their current production (at that time) of Waiting For Godot.  (Now, first of all, I didn't even know RTC was doing "Godot", let alone that Joseph was in the show, but I quickly got up to speed!)  She went on to say:  "Guess who his replacement is?"  Well - I knew right away who it had to be!  I said: "Ted?", and she said yes, that he had gotten in from Texas that evening and that Jim said he was going to make a wonderful Lucky.  As we all know, Ted is so rarely in the public eye that when he does surface, you do everything you can to get to where the venue is happening.  But I thought I had a year to plan this - since we knew Ted was doing La Mancha at RTC in Oct. & Nov., 2005 (at that time, anyway).  My response was that here I thought I had a year to plan this trip to RTC, and now I'd just been informed that "Godot" was opening in a little over a week!  I didn't know how I would afford it.  That's when Karyl Lynn gave me a wonderful present.  She asked me if I could help house manage the "Godot" matinees and the Festival performances, and if I could, they could find me housing.  Well - after about 2-3 days of talking to myself ("You are crazy to even consider this, you have no money, you have no job, etal..."), I realized that absolutely everything fell into place in a way it never does.  I had no job - but that meant no job to have to get time off from, the job I did get just before I left agreed to wait to train me after I got back in town, a friend I would miss seeing had scheduled vacation for the exact same weeks I had - so we wouldn't see each other anyway, and I found an absolute DIRT CHEAP airfare. (NOTE:  For La Mancha guys, try this website:  www.cheapseats.com).  It seemed like I was fated to make this trip.  Then, when I received an e-mail from Karyl Lynn showing me everything planned and who was scheduled to perform, I realized I was crazy NOT to go!  (And seeing Ted for 16 days was the icing on the cake!) I found her on AIM again (another miracle) and told her I was coming.  It was the BEST decision I ever made.

BeckettFest was an amazing festival!  To see the people who were there and get the information we all absorbed like a sponge anywhere else, you would have to go all over the world!  We had performers and directors from Germany, Ireland, England, France, Canada and the USA all in one place!  If you 'd like to take a look at the amazing schedule Karyl Lynn set up, it's on RTC's website here:  http://www.rubicontheatre.org/becfest/info.html.  You can also see some of the reviews and articles on the festival on my Rubicon Theatre Company page!  The Festival shows were just amazing feats of work, and included:  The Beckett Trilogy and A Piece of Monologue (performed by Conor Lovett from Dublin), Happy Days (performed by Robin Pearson Rose & Rudy Willrich (Rudy played Houlihan in "Murder", for those who made that trip in 2000)), Rockaby (performed by Susan Clark), Footfalls (performed by Linda Purl & Karyl Lynn Burns), Krapp's Last Tape (performed by Rick Cluchey), In The Works of Samuel Beckett (performed by Cliff DeYoung), and a wonderful Gala reading called Poetry and Prose (performed by Bill Irwin, Dana Delaney, Barry McGovern and Bruce Weitz).

Aside of the Festival itself, "Godot", the mainstage event in the Festival, was a wonderful production! It was directed by Walter Asmus, who had worked with Beckett directly as far back as 1974.  So we, in effect, were seeing Beckett's direction through Walter!  The whole cast was really amazing, and the chemistry was just perfect.  "Godot" is not an easy show to watch or understand, but with this production, the more we watched it, the more we liked it!  Ted did a wonderful job, with minimal problems - and considering the fact that he spent almost his entire time on stage bent over, that's quite a feat!  Here is a shot taken onstage during the show: 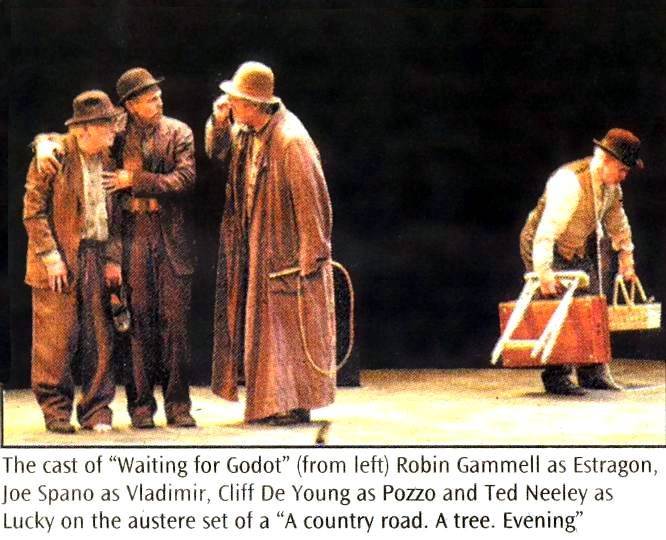 Photo courtesy of The Montecito Journal and Rubicon Theatre Company

Yes, that is Ted on the right.  And that's how he stood for about 90% of his time onstage! He said no one could believe he really had almost no problem doing the show, although the rehearsals were trying (standing like this for 1-2 hours is one thing, but rehearsals were 4 - 6 hours long!). It was a really amazing production, and I felt very privileged to see it, as well as the other Festival productions, as many times as I did.

Below is a second shot from the show - with Joe and Robin - taken from the RTC 20th Anniversary Video you can find on YouTube, and on my title Rubicon Page. To Joe's right is the tree I've made my BeckettFest/Godot wallpaper from:

AND JUST FOR ANYONE WHO DIDN'T GET ALL OF IT - GIVEN THE SPEED TED RECITED IT ON STAGE AT EVERY PERFORMANCE:  HERE IS THE COMPLETE TEXT TO LUCKY'S SPEECH:

Rather than rewrite my entire experience here, I have linked each of my BeckettFest posts separately on this site.  Click on each link below to find them:

I AM HERE AT LAST

BECKETTFEST DAY 8 - "THEY WANT TO BE ENTERTAINED"/ DOOR LATCHES FROM HELL / DINNER IS ON!

BECKETTFEST - DAY 15 - TED GETS WANDA AND ME BACK!

AND NOW - WHAT YOU'VE ALL BEEN WAITING FOR:


NOTE:  Some of these great shots are courtesy of Steve and Cynde Magidson, who are MUCH better photographers than I am!  You can see their complete Wrap Party photo album here:
http://www.ofoto.com/I.jsp?c=4sjrrej.52guz2un&x=1&y=qbj43l

And Steve put my good shots up as well, and you can see my album here:
http://www.ofoto.com/BrowsePhotos.jsp?showSlide=true&Uc=4sjrrej.7oy8gnvz&Uy=kvkvkf&Ux=1

These pictures, and others are also included in the posts above.