Actually, in the long run, "Morrie's" audience attendance (myself included) ended up being higher than originally projected, thank GOD.  Below are some of my comments on this wonderful show, and some of the unbelievable events that transpired before, during and after its' run:

Those of you who live nearby, or have a means to get to RTC, DO NOT miss this
show, it is VERY SPECIAL!!!  I saw the matinee this past Sunday (7/3/05) and it is
a truly beautiful piece of theatre!  For more details and articles on this show, check
out my page for Joseph!

A concerned Rubicon Supporter wrote this letter published in the Ventura County Star and posted on insidevc.com today:

I spoke with Joseph Fuqua about this after the 7/3 matinee of "Morrie".  The letter is basically accurate, however, it's not just the advertising "Morrie" can't have.  It can't have any press at all, meaning no reviewers. Now, the matinee I saw was almost sold out, and that's a good thing, BUT, it has to fight for its' audiences. This is a BEAUTIFUL piece of theatre. A very touching, funny, lovely show. Joseph, Harold and Director Jenny Sullivan have all worked VERY HARD to give Ventura, and anyone who can get there, this wonderful production. I IMPLORE you to go see this show. Help them fight back against this "no press" clause and give them the audience they so richly deserve. "Morrie" plays through July 17th. 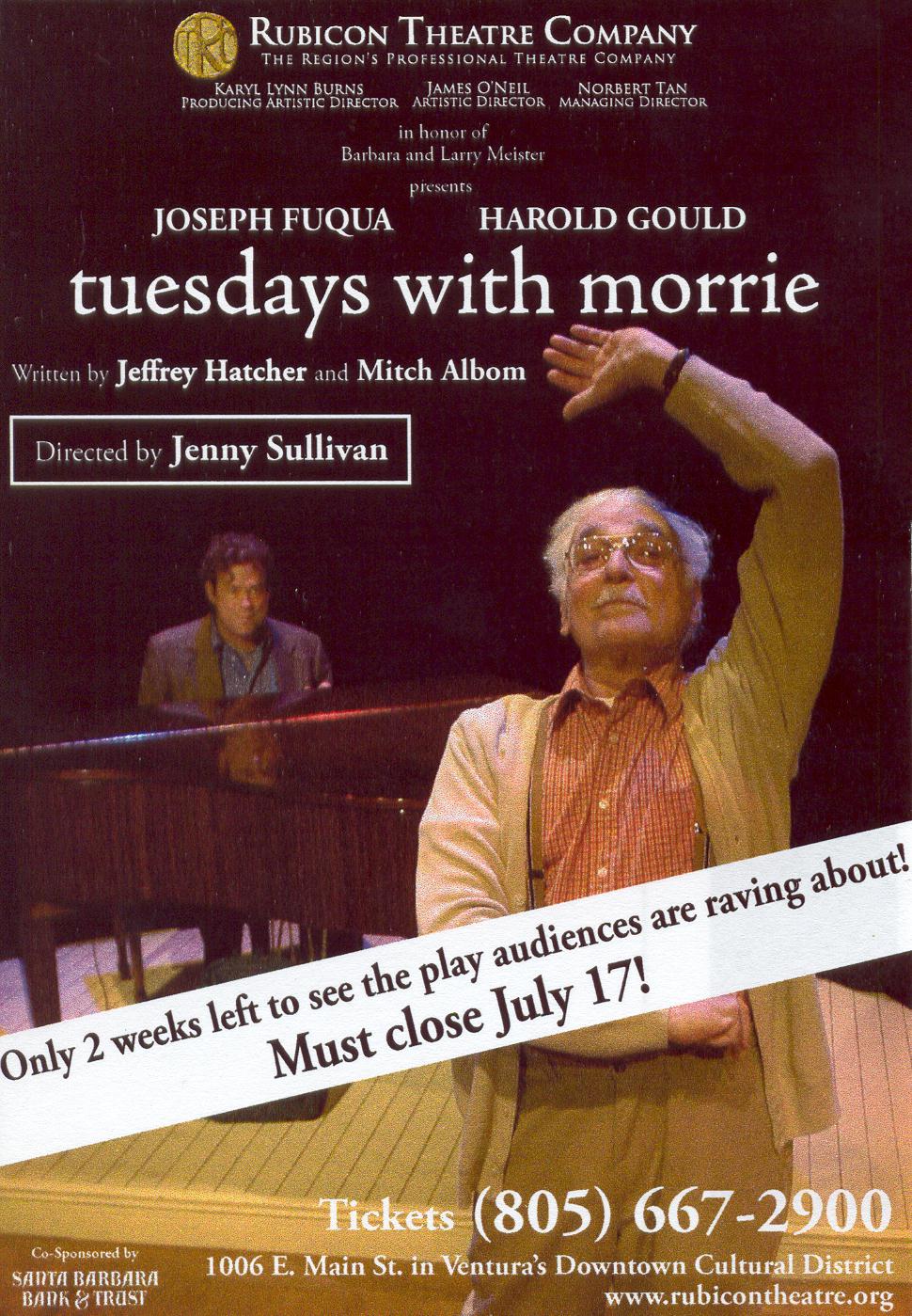 A POSTSCRIPT ON THESE EVENTS.

As it turns out, it was a good thing that this production was allowed to go on after all. Hal Linden (of Barney Miller fame) was forced to withdraw from the National Tour of Tuesday's With Morrie, due to illness within his family. Harold Gould (of M*A*S*H fame - and RTC's Morrie) was paged to take Hal's place in the National Tour. So RTC ended up saving the bacon for the National Tour. How's that for an ironic turn of events? Lucky for all of us that both these productions went on. See the articles below for details. 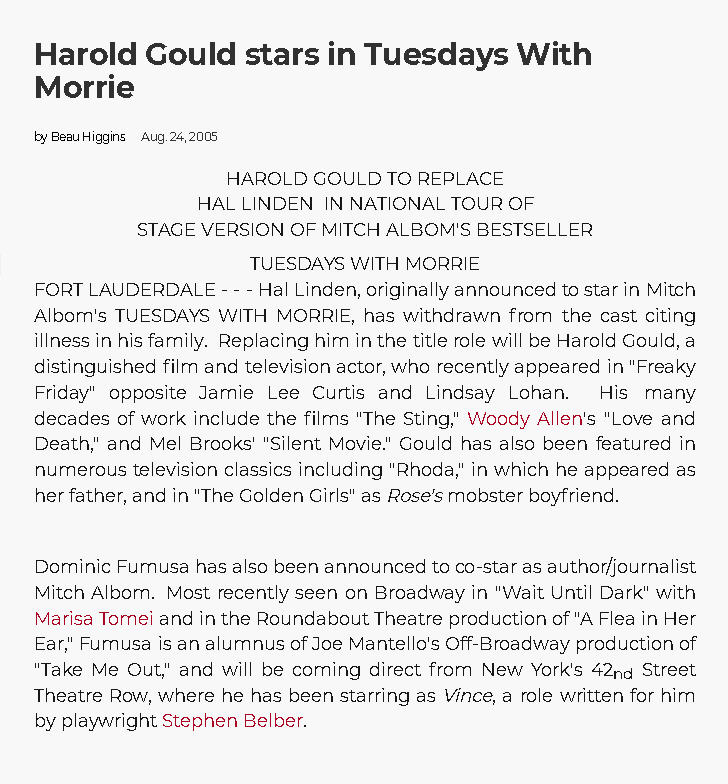 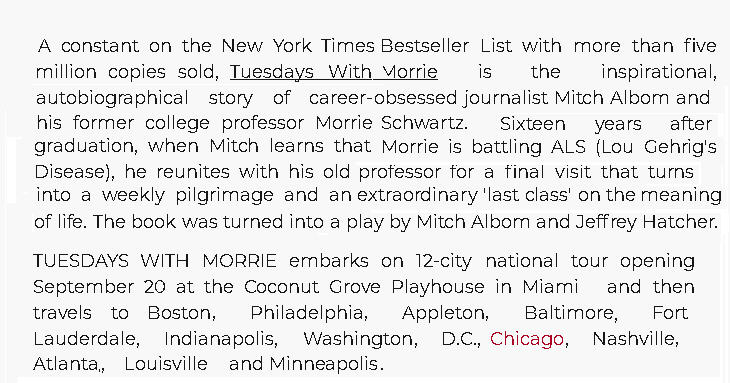 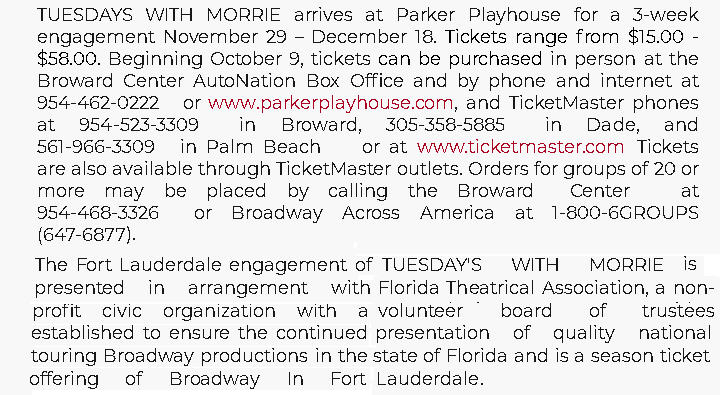 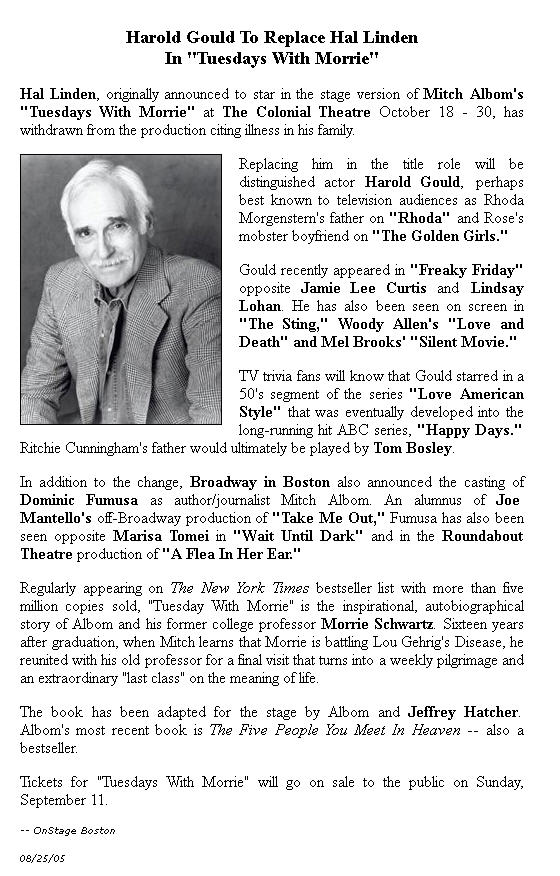