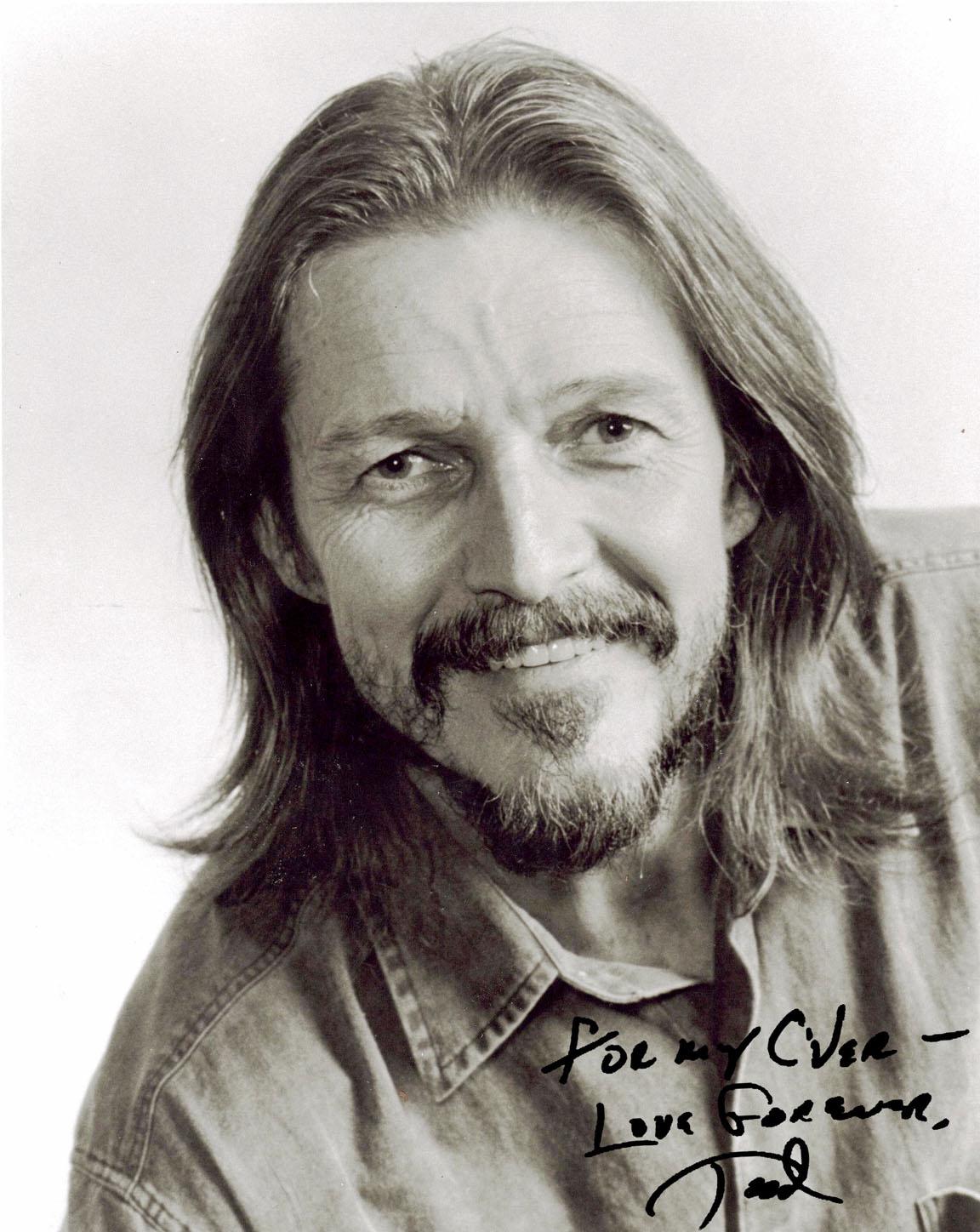 A MINI TRIP DOWN MEMORY LANE THROUGH MEDIA & PICTURES

Below is a letter and bio (circa 1975), some blurbs and articles and some hard-to-find pictures from when Ted was just getting started.  What memories these bring back, I'm sure!  The top section (above the pictures) is all courtesy of Ann Stickford (thumperdances2@sbcglobal.net).   ENJOY!!! 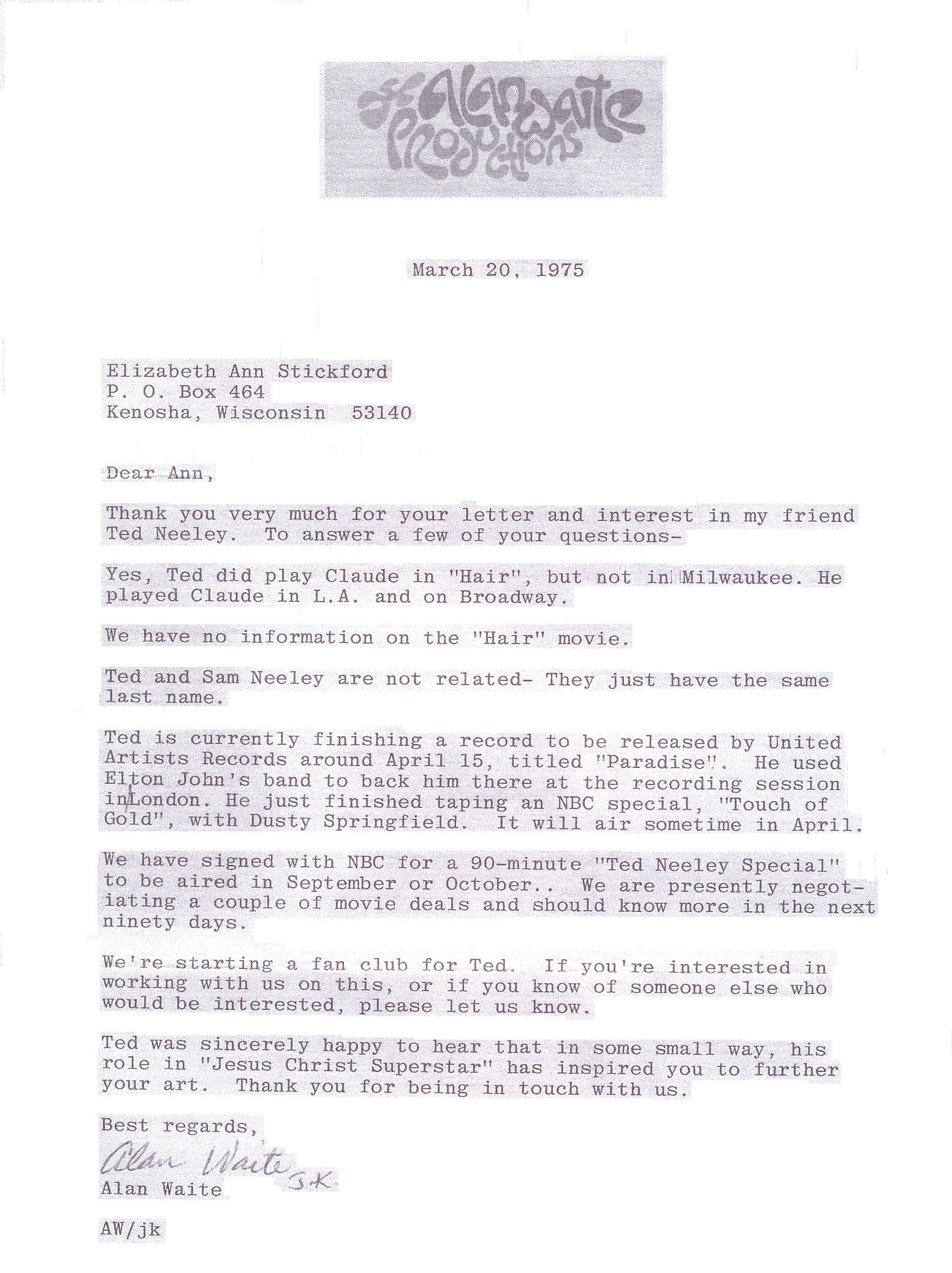 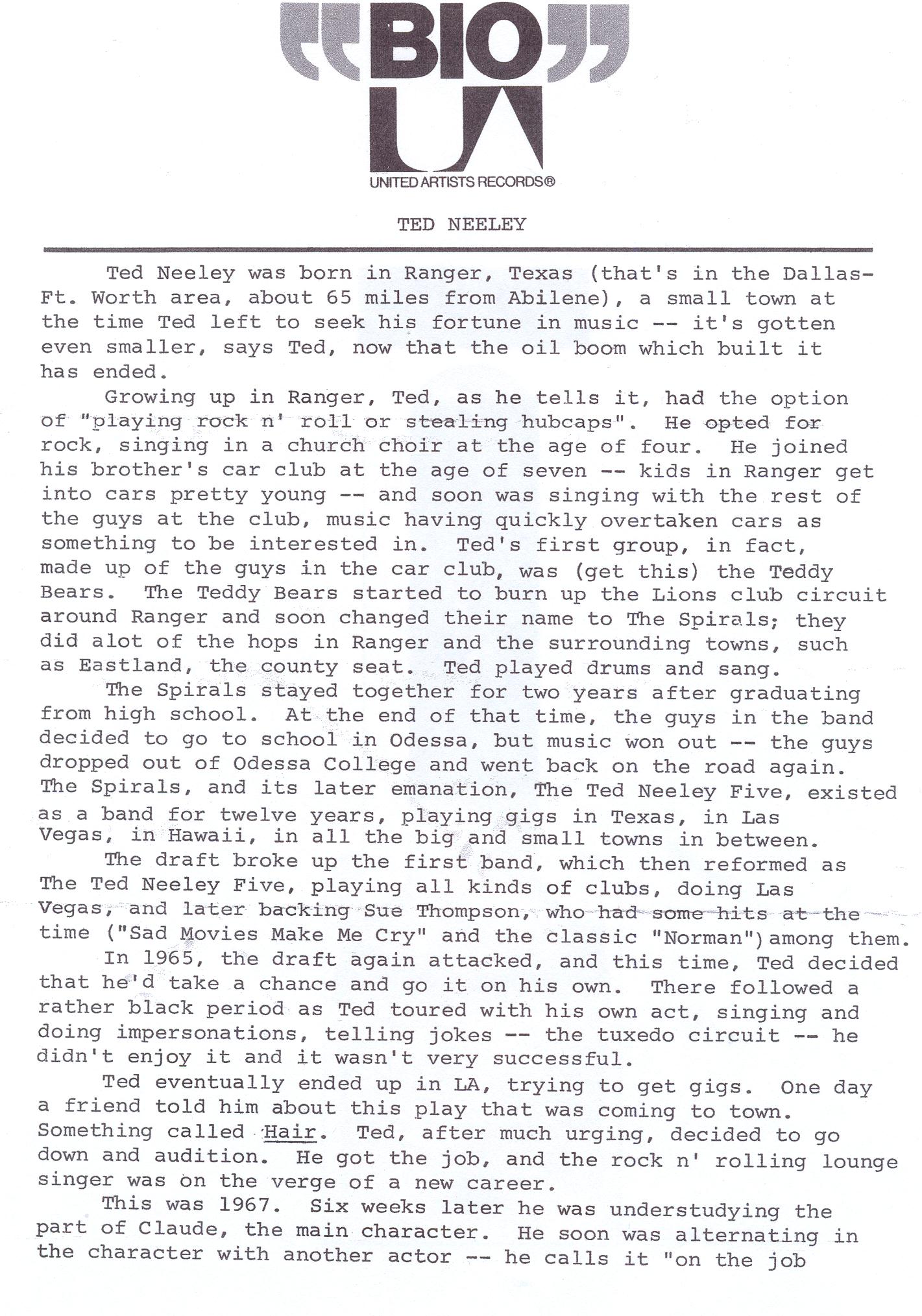 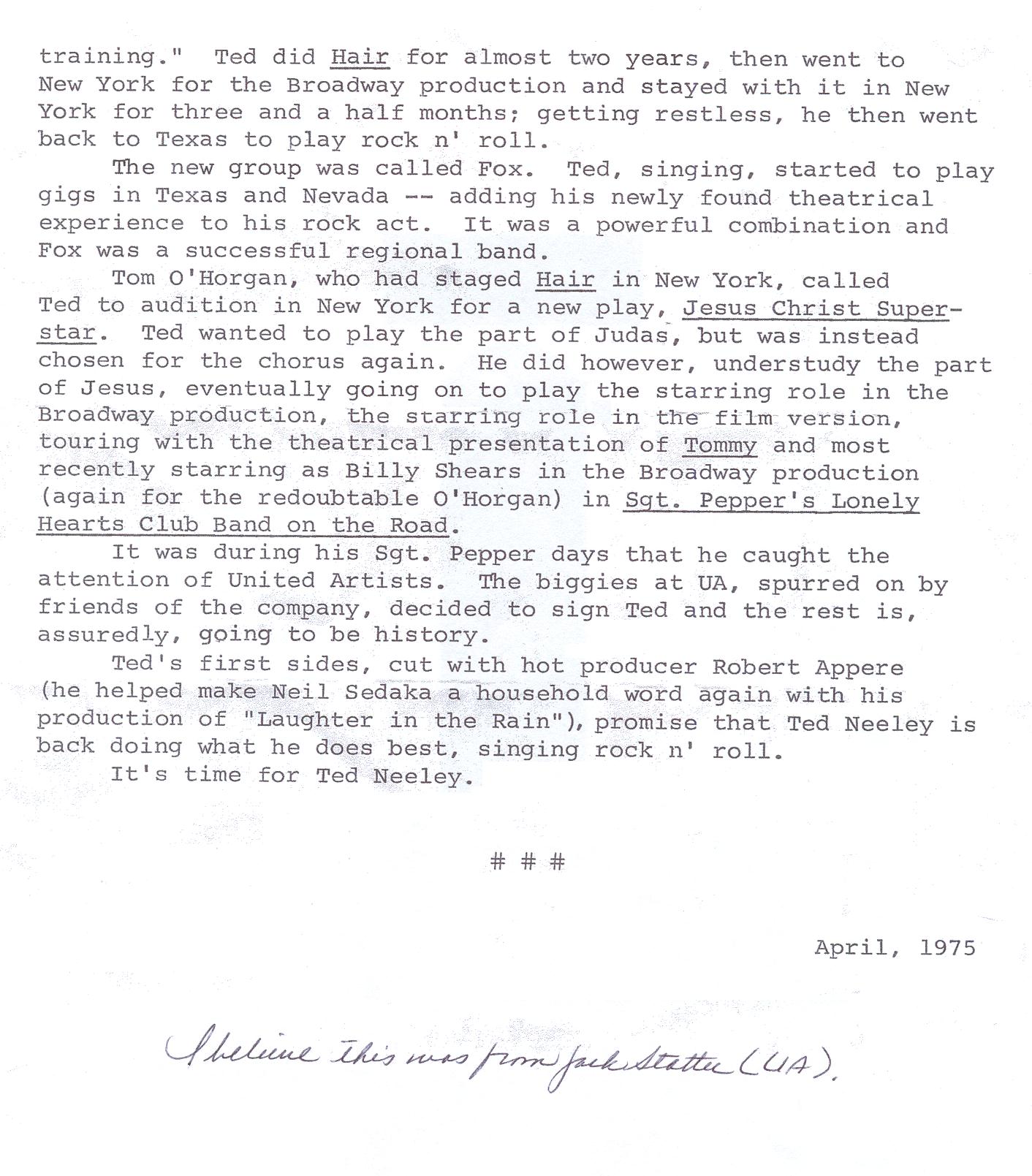 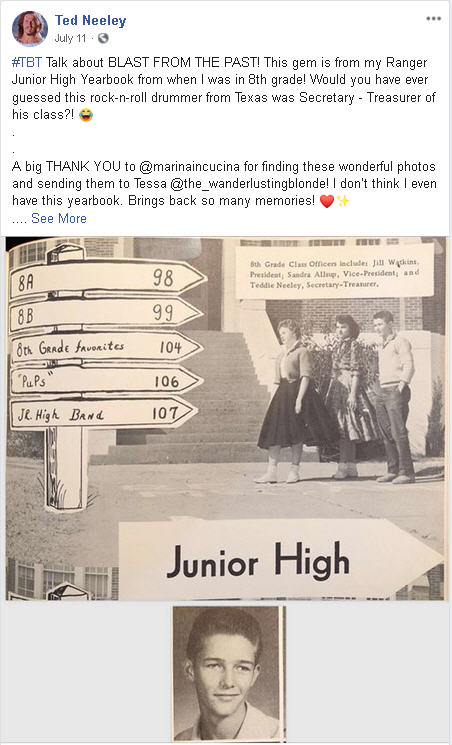 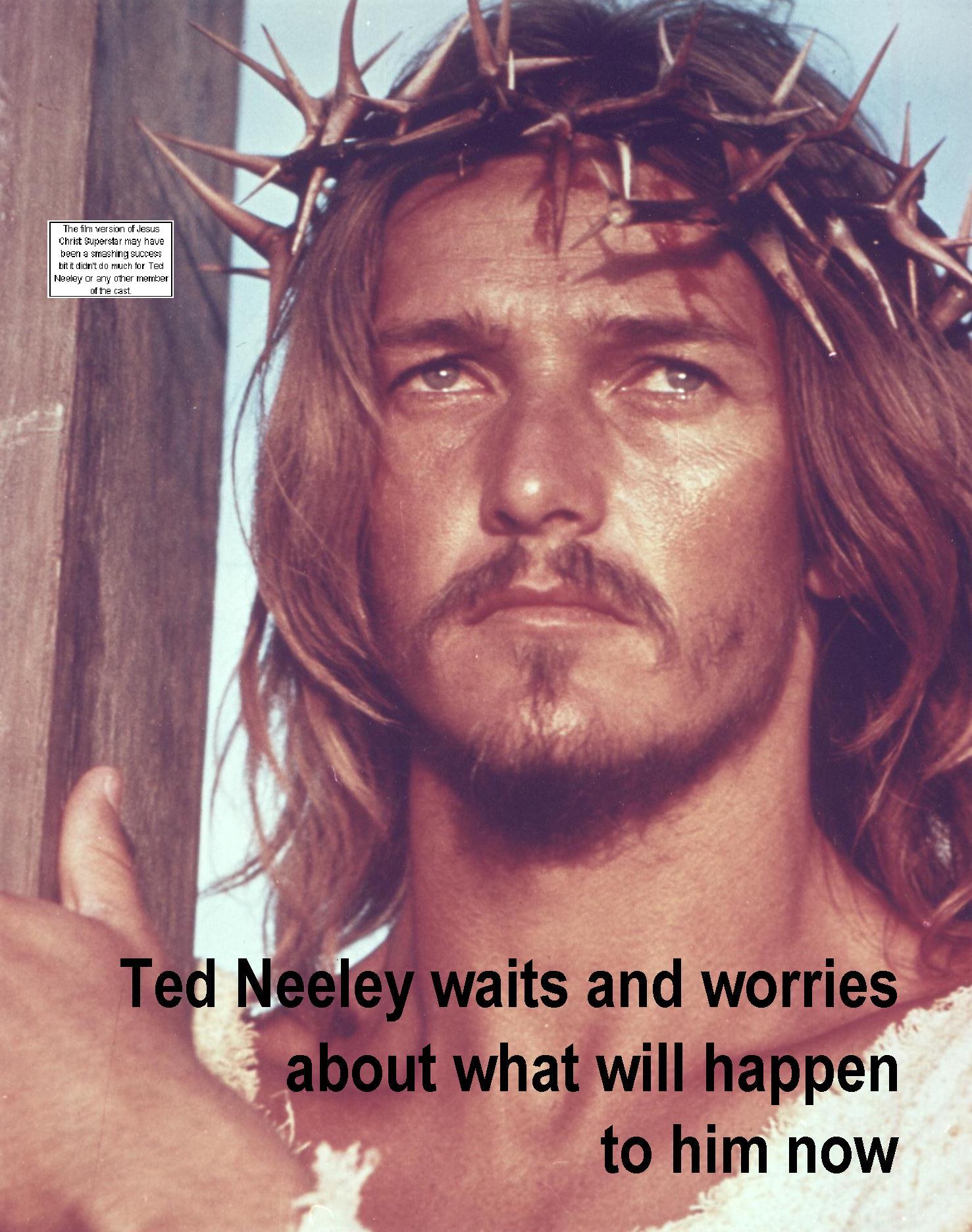 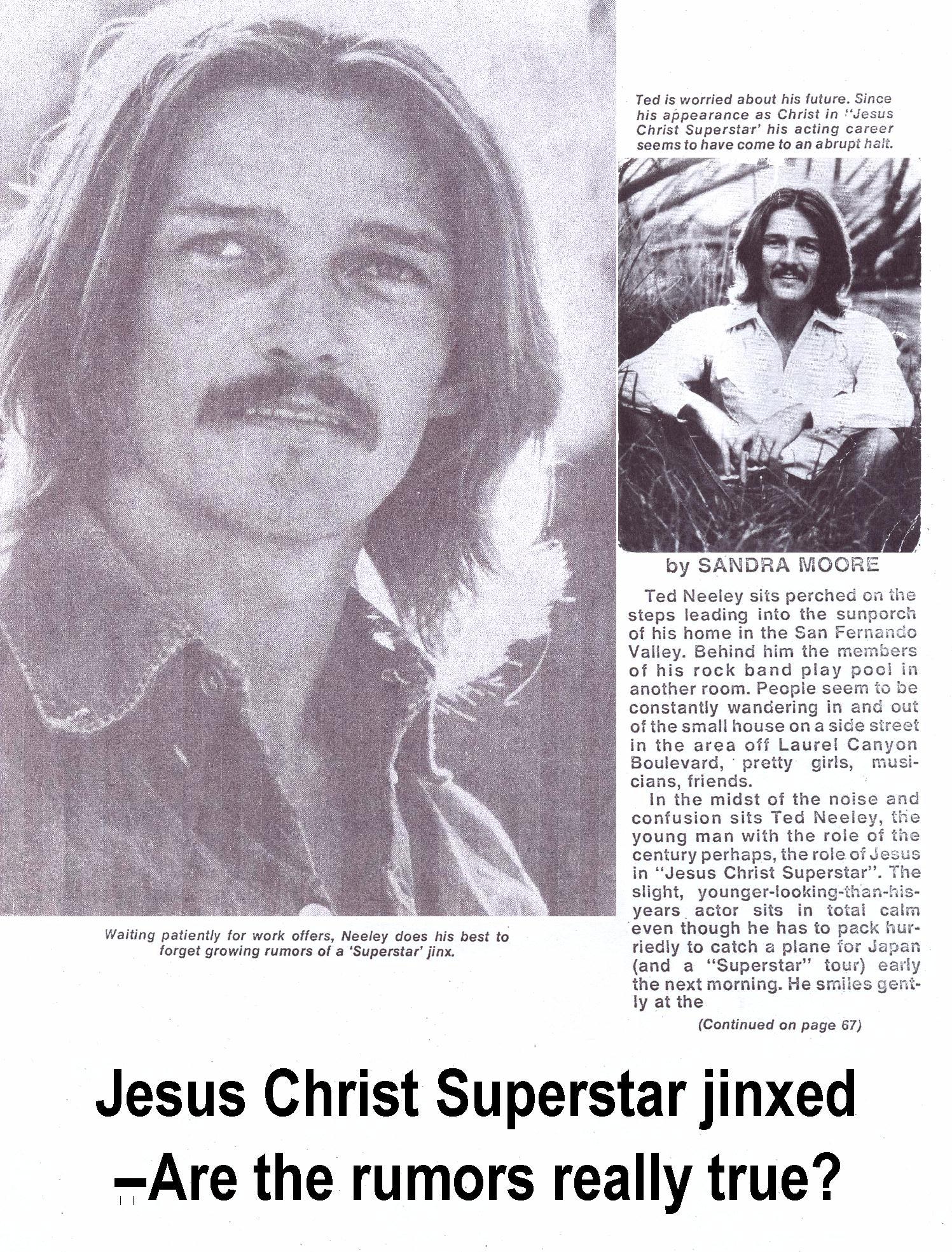 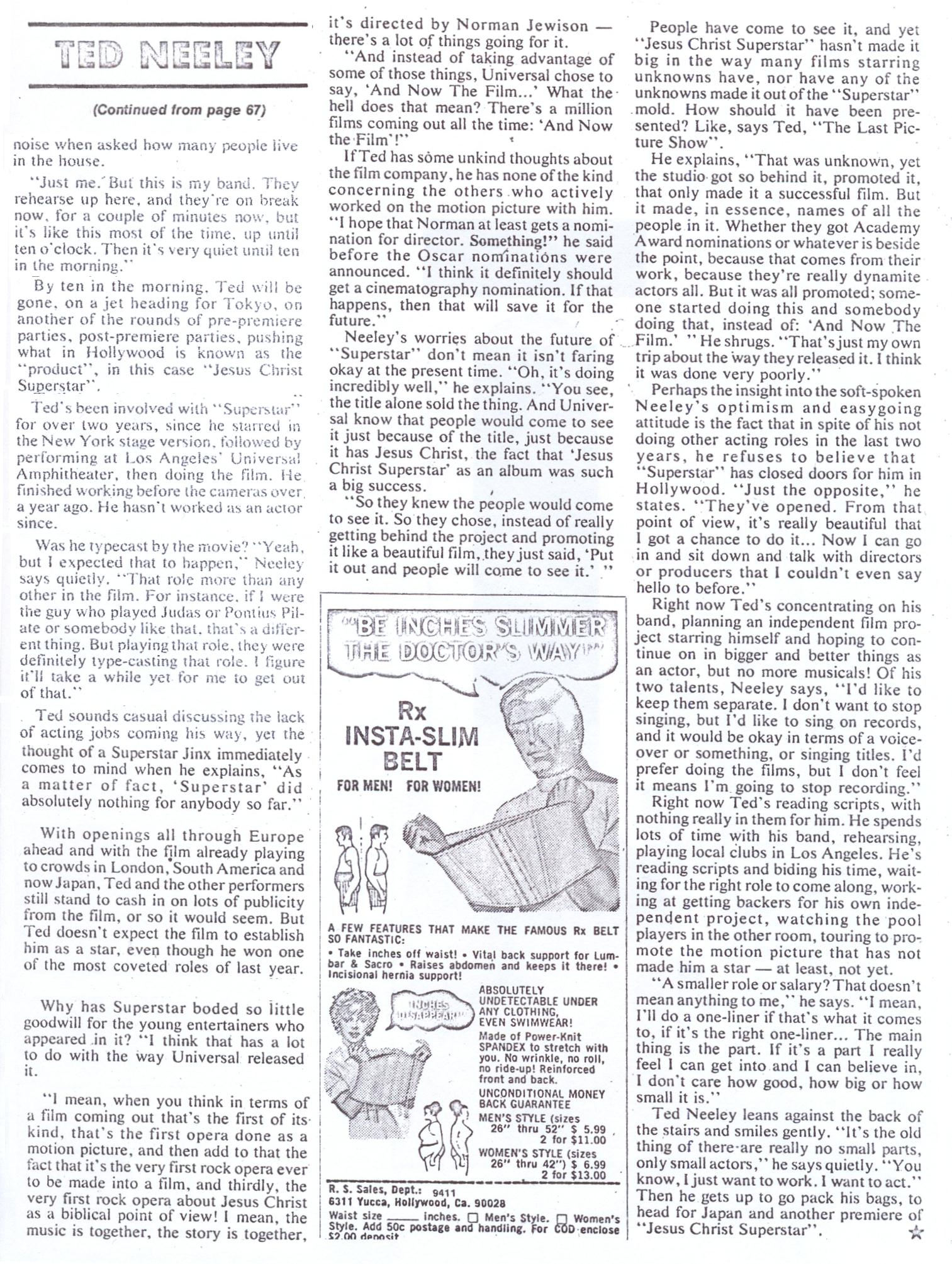 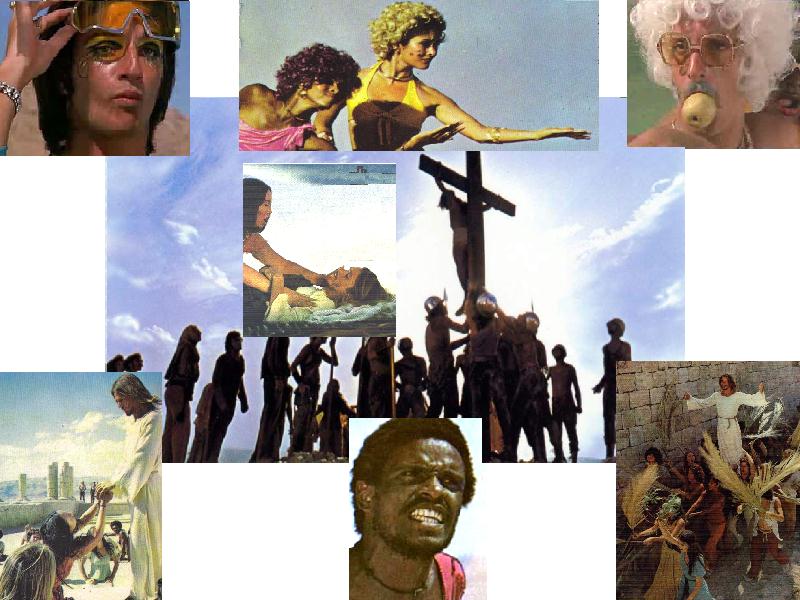 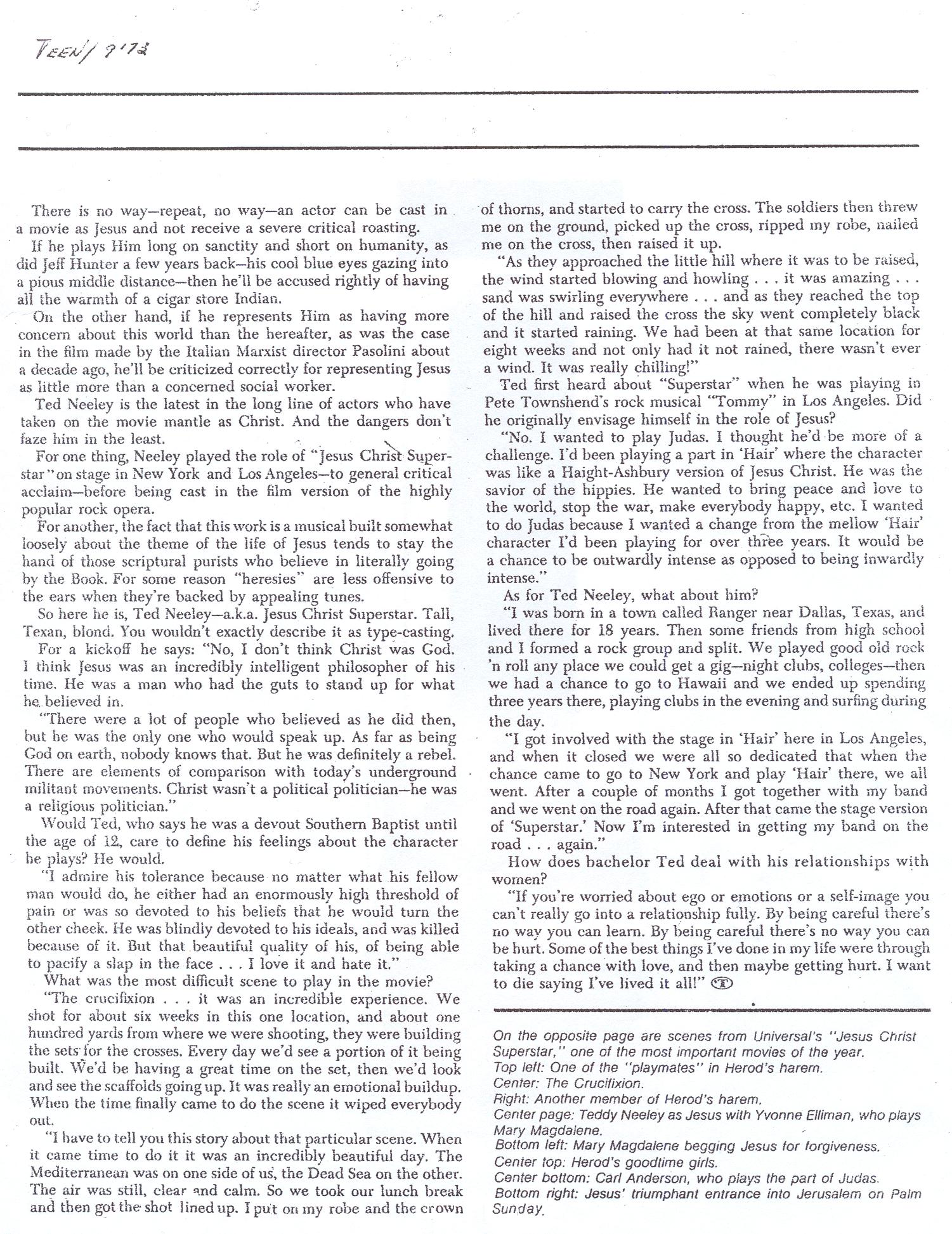 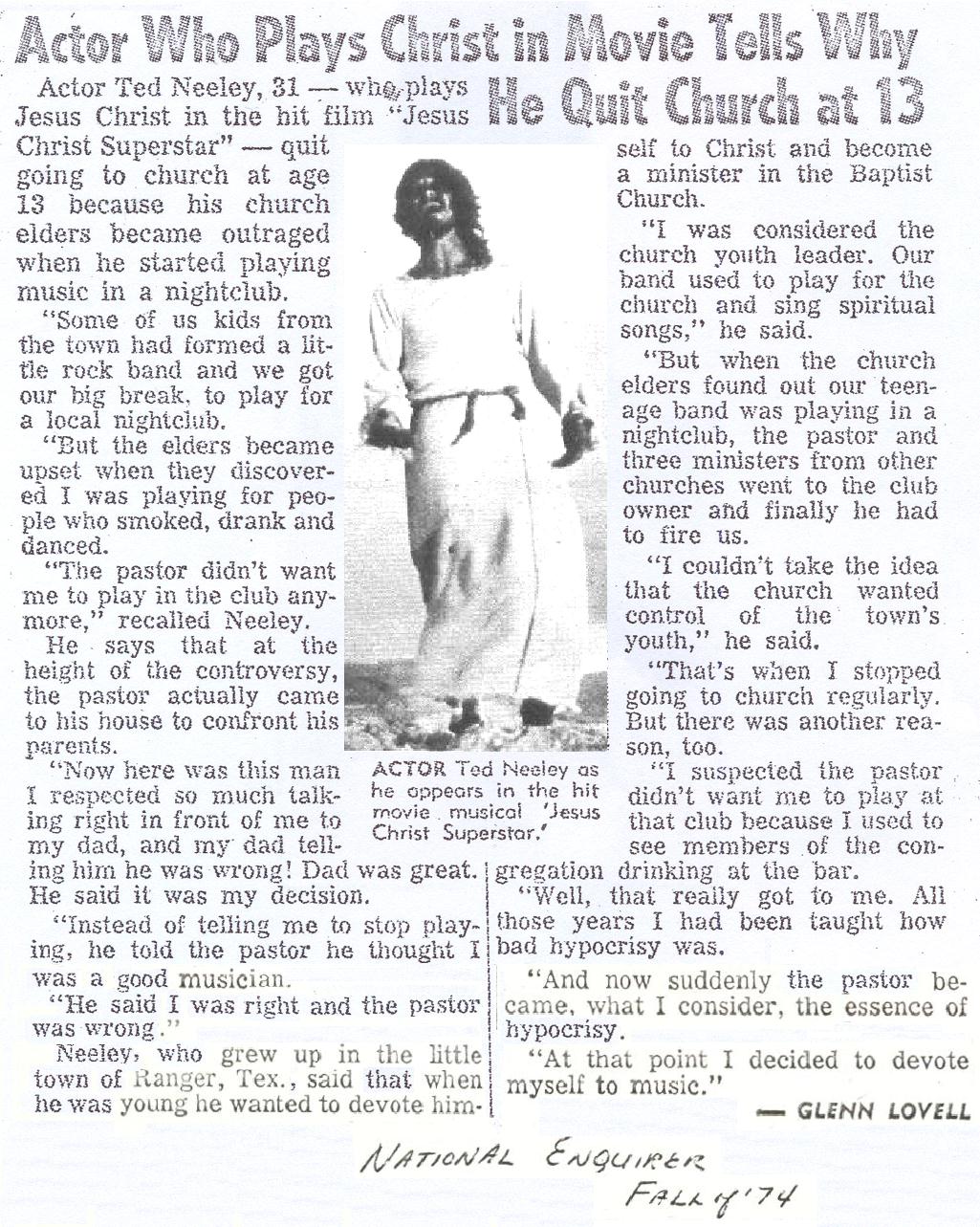 The ZooWorld article below was posted by Ted himself on his Facebook page on 1/20/14! 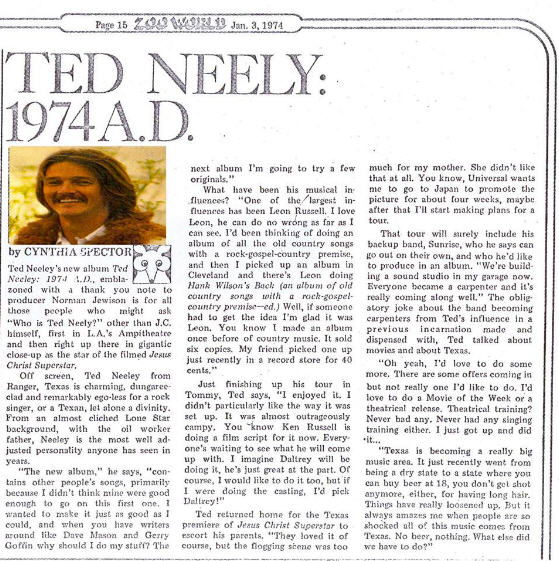 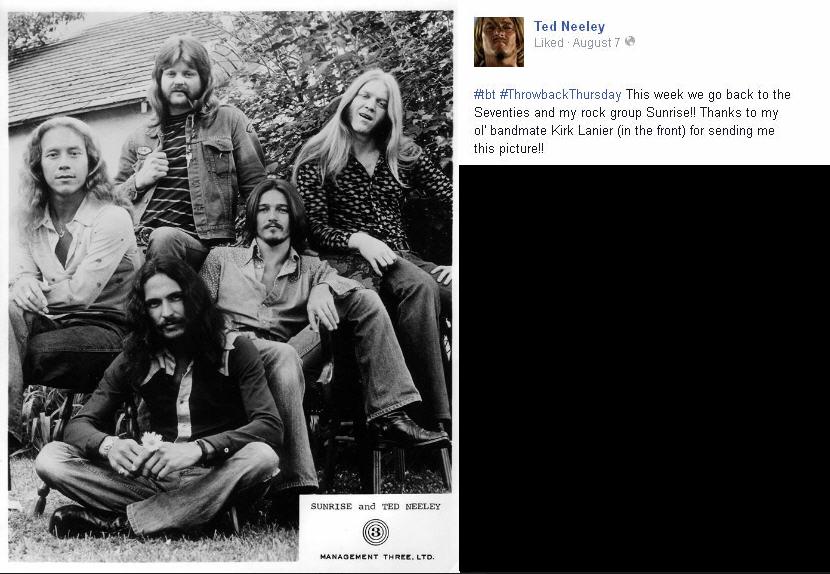 Helena N. C. Nieto, one of our Tedheads from Spain (hnc62ngg@telecable.es), sent me this link off the Ranger High School Exes Website (Ted is listed in the RHS Class of 1962 on the site), (7/5/05 - Diane Barnes found this link again and found pictures of Ted's old girlfriend, who died in 2003, and his brother Jackie in the "Then and Now" section: http://www.angelfire.com/tx/rangerexes/reunion26.htm.) which shows Ted's high school picture (posted below), and has an  interesting article (also posted below):  http://www.angelfire.com/tx/rangerexes/superstar.htm 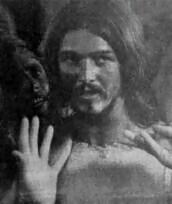 The rock opera depicting Christ's last seven days is back on stage, starring Texas native Ted Neeley (RHS Class of 1962) in the title role. Featured songs include "Hosanna", "Everything's All Right" and "I Don't Know How to Love Him".

"Jesus Christ Superstar" began as a two-record rock opera in the United States and Britain in 1970. Andrew Lloyd Webber, composer of "Cats" and "Phantom of the Opera", and Lyricist Tim Rice collaborated on it.

After the successful album, the two men, plus Robert Stigwood, created the Broadway production of "Jesus Christ Superstar". It opened in October 1971. Advance sales topped $1 million, an astonishing number.

Ted Neeley made his motion picture debut as Jesus in the Norman Jewison movie "Jesus Christ Superstar". It was shot on location in Israel. He received two Golden Globe nominations for his performance.

On special nights at the Ranger, Texas drive-in theater, Teddy Neeley and the Teddy Bears mounted the projection building during intermission.

Neeley and two other band members wowed audiences on those 1960's nights with slow, romantic tunes like "In the Still of the Night." Teddy performed the Teddy Bears his senior year with Joe Barker and Billy Patton. Neeley sang tunes from popular singers of the era such as Paul Anka and Bobby Vinton.

Ranger High grade seven through 12, gathered for assembly on Fridays. The 800 or so students watched the maroon and white curtains sweep open. On sight of Teddie Neeley and the Teddy Bears, they filled the auditorium with cheering.

Hometown success didn't go to Neeley's head. But then things were different back in the 60s. "Growing up back then was so simple and sweet, not like it is now."

In the town of about 3,000 residents, no one locked their houses and keys hung in ignitions. It was a place where everyone knew everyone.

Ranger teens indulged little in smoking, drinking or even dragging since few had a car.

On Friday and Saturday nights, they hung out at Teen Town, a small club for youth run by the school. (Based on article in Ranger Times)