BECKETTFEST DAY 9 - THE DAY FROM HELL / DINNER WITH TED

Okay, today was the biggest baptism in fire a House Manager could have. Our first show was at 11AM today, it went until close to 1PM - we opened the house again about 10 minutes later for the second show - which was at 2 - it went until 4:30, the 3rd and 4th shows were at 5PM, and went until about 6 - followed by a talkback downstairs, then we had half an hour to get the house open for the last show at 7. WHEW! I house managed all but one. I found out that I was not house managing the 2PM "Godot" about 1/2 hour before the 11AM show. Well - I got a breather - and consequently a fabulous seat (a real fluke - I happened to go talk to Lane at the will call when a gentleman named John was turning in his wife's ticket 3rd row center! Lane handed it to me and said to John: "Would you like to sit with this young lady?" he said sure - and we had a nice afternoon watching "Godot" together!) to watch "Godot" end to end finally, so I was fine!

"Happy Days" (11AM), "Godot" (2PM). "Rockaby"/"Footfalls" (5PM) and "A Piece of Monologue" (7PM) all went VERY WELL. We had great houses too! About halfway through "Godot", however, I realized that we did not have stuffers for "Monologue", and went to bang on the door at Brian and Joseph's house (they live next to the theatre), but no one was home. 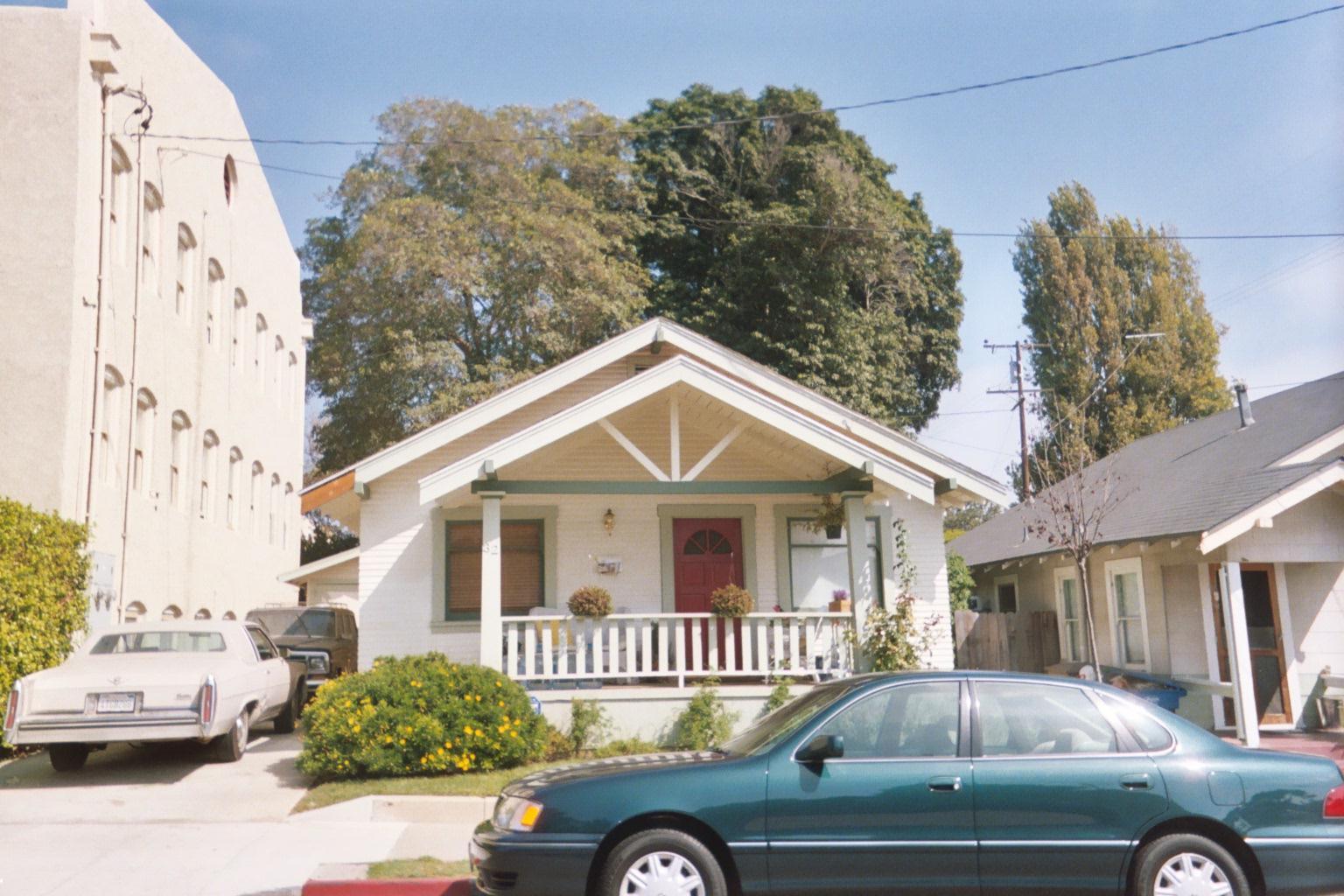 The former "humble abode" of Brian and Joseph. You can see the
back of RTC on the left. A very sweet house, but I have no idea who
lives there now.

Ah well - we did without - even though they finally got Brian on his cell - the printer was broken. Anyway, we'll have them for the next show.

I got to deliver a dozen roses to Ted before "Godot" today. They were dropped off at the office. I took them to the dressing room, and said: "Oh, Mr. Jesus Christ Superstar, someone sent you a present." He laughed, saw the flowers, then said: "I don't know which is more beautiful - the flowers or the deliverer." I said: "Oh - well - let me put these down." Then he hugged me and said: "The deliverer is always beautiful. ". (That was so sweet.) The guys liked that. He said he bet I knew whom they were from. I said it wouldn't surprise me. Turns out, he didn't. They were from one of the caterers, Gail, but the "Godot" cast never sees the caterers because they only cater intermissions of "Godot". I found the sender, and let Ted know whom to look for. And told her to hang around because Ted wanted to thank her personally. She said: "If he's out in less than an hour and a half." I told Ted that and he laughed. I told her he would be.

Wanda was with me all day - and THANK GOD! Because she helped me stuff for every show! All ushers should be as good as Wanda!

Ted was there for "A Piece of Monologue", as was Stephanie Zimbalist. After "Monologue", Wanda and I went to join Ted, and we heard some of the "Iguana" folks saying to him: "___________ (don't remember her name) is in your room.", and "_______________ (don't remember his name) is in your other room." I figured out that they meant these folks were in hotel rooms that Ted had previously stayed in, but teased and said: "Hey, it sounds like a menage-a-trois is going on here!" They all laughed. We sat while Ted talked to a couple other folks, one of which said that a group was going drinking at a nearby restaurant, and did he want to go along, and then Kathleen (Stage Manager) came over to say that there was an impromptu party at Brian's, but I said: "Sorry Guys, we've got dibs - we asked last week!" And Ted laughed. Shortly afterward (about 7:45) we left the theatre. Ultimately, Ted told us that he was glad to go to dinner and have a couple of hours away after being "on Beckett" for over a week. We understood - since we've been "on Beckett" too - and Wanda more than I!

We got to the street, and Ted said: "Well, I have a car, how about we all 3 go in one?" And we said sure. Then he said: "Okay, you (two) wait here, and I'll get my car and come pick you up. It's easier for one to sneak out than three." (To get the car, we would have had to walk right past Brian and Joseph's house.). Ted was wearing a sweatshirt with a hood, and put it up - and then walked down the other side of the street. Wanda and I looked at each other and laughed - and she said: "You should get a picture of that for the website!" I said - "No, I can't do that - that would negate the whole idea!" and we laughed. About a minute later, Ted drove up and we got in his car.

We drove to a little place called The Westside Cellar Bar & Grill.

Ted chose it because the lighting was dim - which we assumed meant that he wanted to hide. Wrong. He said it wasn't that he wanted to hide, just that the stage lights - which are so bright - are on him all the time, so it's nice to have dimmer lights when he can. (NOTE: Sorry guys, the restaurant is now permanently closed. :-()

However, when we walked in, it was brighter than it had been the last time Ted went there - which was last week. There were no tables available, so we sat down in this little section in front of the restaurant which had cocktail tables - and the waitress tried VERY HARD to get us to order wine while we waited. It was actually funny. First she put down the dessert menu, then gave us the entree menus, then moved the candle and plunked the wine list down in the middle of the table, on top of everything, telling us what wines they had, what it costs for full and half glasses, and if we "fell in love with any of them", we could take a bottle home at something like 40% off. When she went away, Ted said: "Isn't it amazing how much a waitress will go through to get you to buy what they want to sell you? She put the wine list down on top of the first menu she put down, and even moved the candle to make room for it!" We laughed. And they brought us water, and wanted to give us bread. We elected to wait until a table opened up to get anything else - as all of us didn't want to be coerced into eating - as Ted said - "...dinner on a coffee table." Fortunately, a table opened up relatively quickly.

The food at The Westside Cellar is very good - and very Californian. Including Sashimi. Ted talked about it being an acquired taste. He asked me if I liked Sushi. I said some of it. The stuff in the cups of rice. He said that's sort of cooked, but Sashimi is raw fish. (No thank you.)  I said Lox is one thing. He told he that the first time he'd had lox, eggs and onions he loved it, but hasn't been able to find it since. I said: "Well, you need to come to Corky & Lenny's in Cleveland for that!" He said it's a little far to go for dinner. (LOL!) I kidded him about the joke I'd sent him awhile back that he loved (any Jewish Holiday: "They attacked us, we won, let's eat!") and he laughed. Then he told me that he's been to Cleveland a lot over the years, but has only been in the heights once - other than that he was in the Warehouse District and at the theatre, and that's it. Guess I'll try to remedy that one if he ever gets up my way in the near future (LOL!).

One funny aside from dinner: When they gave us water, I told Ted he could have mine, since I don't like water. He said it reminded him of Kevin Kline's comment from A Fish Called Wanda. We asked what it was and he said: "I'll have to be less than genteel to repeat it." (always the gentleman), and we said it was okay so he said - with a British-like accent: "I don't like water, fish piss in it!" And we all laughed.

Ted had fish (I don't remember what kind) and Wanda and I had fillets - and Ted said they were cooked in the kind of wine Ted said Rasputin liked to drink. Ironic that that should be on the menu! LOL! And Wanda and I beat him to the check! We FINALLY got to do something for the man who has done so much for all of us! YAY!

Now, I will come right out and say that I cannot talk about most of what was discussed at dinner, because it was pretty confidential stuff and Ted has asked me not to put it on the web. (He actually teased me and said: "If I see any of this (the confidential stuff) on the web, I'll know who put it there!" and I said: "I can promise you that I will not say anything to anyone you don't want me to say. So if it gets on the web, they didn't hear it from me!"). Sorry guys, I know you want to hear - and dinner did last 4 hours with Wanda, and then Ted and I talked for another hour after Wanda left - but I'm not at liberty to be very detailed at this time. I will say only that we talked at length about JCS, Rasputin, BeckettFest and the difficulties of Show Business in general at the restaurant. Ted and I talked a little more about those things and some about Carl after Wanda left, but that's all I can say now.

Ted did want me to let everyone know one thing about his future plans:

He told me to please let all of you know that "La Mancha" IS in his definite plans, PROVIDED SCHEDULING WORKS OUT AROUND RASPUTIN AND THE PROPOSED JCS VATICAN/TOUR THAT HAS BEEN MENTIONED PREVIOUSLY. At this point, Ted is doing "La Mancha", but if anything changes in his schedule, HE WILL LET US KNOW. All shows at RTC contain this statement: "SUBJECT TO CHANGE". Now I am NOT - repeat NOT - saying he's not doing "La Mancha", just that if certain things Ted is working on change his availability, there is a REMOTE - and I mean a REMOTE chance that this could change. I will say that Ted doesn't believe it will change, and that he will do "La Mancha" - he just wanted everyone to know that this is the way he wants his "official" statement worded at this time.

I gave him a hug and wished him a safe trip, and Ted and I said goodnight about 1AM, I got in my car, and he left to go to his hotel to get some shut-eye - because he leaves for LA at 8AM tomorrow and will be gone until Wednesday. I said we'd miss him, and he thought that was sweet.

Tomorrow is a light day - only 2 shows and one Brown Bag. Back tomorrow night.