The cast of Jesus Christ Superstar during it's 4+-year tour.
Photo courtesy of Debbie Spykerman (spyk002@aol.com)

I can't say enough about Norman Jewison's BEAUTIFUL 1973 film of Jesus Christ Superstar. It brought Ted and Company to our attention, and has left a lasting statement to what ALW's material can be at its' best. On these pages you will find publicity articles and shots, film stills, and, on this page, a few things of interest having to do with the film itself. ENJOY!!!

You can find specific pages for the media shots and film stills at the following links:

SPECIAL SCREENING OF THE NEWLY REMASTERED DIGITAL WIDESCREEN VERSION OF JCS ON TCM!!! 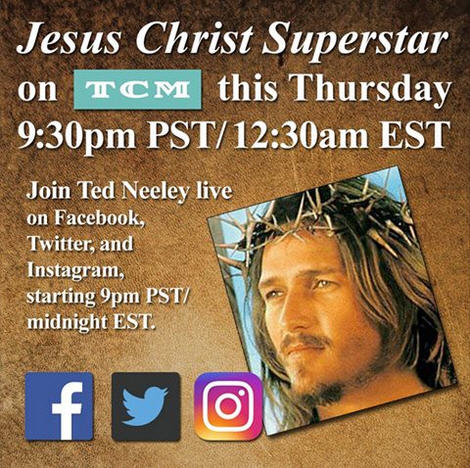 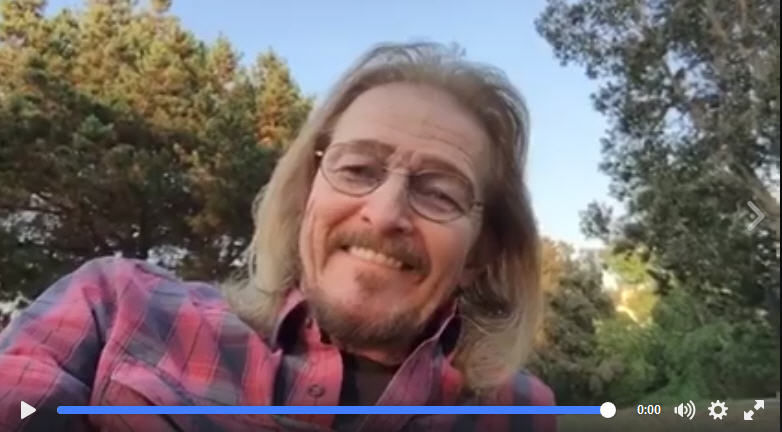 UPDATE 6/27/16 (From Ted Neeley.com and Ted's Facebook Page)
CLICK ON TH E VIDEO/PICTURE LINK ABOVE TO CONNECT TO TED'S VIDEO!!!
CLICK ON THE PICTURE/LIN K BELOW TO GO TO THE TCM OVERVIEW PAGE!!! NEW DOCUMENTARY ON THE MAKING OF THE JCS FILM AND CAST REUNION AVAILABLE!!!

In a Facebook and tedneeley.com update on 9/18/15, Ted has announced that there is a new documentary on the making of Norman Jewison's BRILLIANT 1973 film of Jesus Christ Superstar, and the cast/director reunion that happened this past April 27-28 at The Beekman Theatre in NYC. It is due to ship December 1, and the cost is only $25! See details below! ENJOY!

Pre-order at this link:

Norman Jewison's BRILLIANT 1973 film of Jesus Christ Superstar has now been released in a special edition widescreen DVD with commentary by Ted and Norman Jewison included! Below is a shot of the DVD cover, some links to purchase it for lower prices and the commentary transcribed! ENJOY! 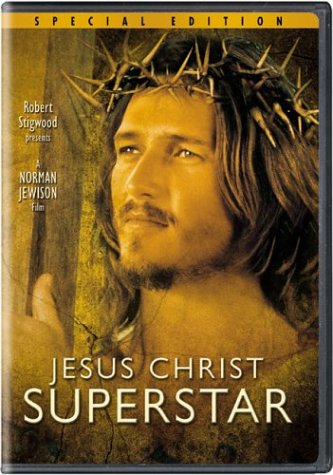 Laura Dacosta (dacosta4@sympatico.ca) from DaGirLS) found this info - thanks Laura:

Courtesy of (hnc62ngg@telecable.es), the latest info on this Special Edition DVD that we've been waiting for!
This DVD includes an interview/commentary with Ted and Norman Jewison.  Here's the Amazon UR to order:

Mianne Tripp (mtripprn@hotmail.com), one of our newest Tedheads, has found a VERY INTERESTING interview here:

done with Lynn Neary on the Highbeam show "Talk of the Nation" on 2/12/04.  The interviewees include, among
others, Norman Jewison.  The interview is VERY LENGTHY, and I will not post it all here.  There are a few parts
mentioning Ted, which I have posted below.  You can buy the entire interview at the link above:

NEARY: We've been talking about the fact that the various images of Jesus have emerged over time as sort of both products and reflections of the times that these images are created in. What do you think the Jesus of "Jesus Christ Superstar" said about the time in which that film was being made? How did it reflect that time? What did it say about that time?

Mr. JEWISON: Well, I think it captured the imagination of millions of people all over the world. I think of all the films I've made it probably had the most--the strongest reaction, especially in Latin America and certain strongly Catholic countries. I think the film, because it was a musical and because it was a very strong, strong score and extremely popular throughout the world--I think it carried with it a kind of a modern identification for Jesus, for the character. I think Christ, the character played by--Ted Neeley was the actor, and for the rest of his life, Ted Neeley has played this role, in a way. He has literally become that character and has, I think, performed in the stage version of "Jesus Christ Superstar" almost continually for the past 30 years or so. I

It's very strange. I think it was young--I think Ted Neeley was very attractive and very--he was a rock star. And this kind of interpretation of the young, dynamic, angry at times character--because, you know, he was anti-weapons, he was anti-guns, he was anti-money. He was--there was enormous scenes where he was smashing everything from American Express cards to travel posters simply because of the materialism of the secular world, almost.

Mr. JEWISON: And it's such a young person's--you know, you must remember Tim Rice was only 25, 26 years old when he wrote this.

Mr. JEWISON: I mean, they were young men. And they defended it brilliantly. I went to many debates. The archbishop of St. Paul's Cathedral in London, he had a tremendous debate with a representative from the Anti-Defamation League in New York. And it was really astounding, the amount of controversy that eventually started to rise up in such a way that the film was not nominated for an Academy Award and all of those things. And it won awards all over the world.

NEARY: Producer, director and writer Norman Jewison is a veteran of many films, including the 1973 film "Jesus Christ Superstar." His latest movie is called "The Statement." He joined us from his home in Los Angeles. We are talking about Jesus as an American icon. If you'd like to give us a call, the number is 1 (800) 989-8255. And I wanted to ask you now, regarding "Jesus Christ Superstar," you say in your book, Richard Wightman Fox, that it was at that moment that Jesus became part of the sort of celebrity culture of America.

Mr. FOX: I think I would've told Norman Jewison this if I'd had a chance. I just think his film is magnificent in this particular way, that it does a new job on celebrity itself. It helps us as Americans understand what celebrity is because he gives us in Ted Neeley's Jesus a Christ who is actually destroyed by his own celebrity. So we get, in a sense, a depiction of the downside of fame. This Jesus is destroyed by his own followers in a sense. The crowd more or less consumes this Jesus and he's driven to a kind of despair by the very popularity he engenders. And the Gethsemane scene in "Jesus Christ Superstar" is, in my mind, the greatest Gethsemane scene we've ever had on film because it's this wrenching anguish on the part of Ted Neeley trying to understand how he can possibly take another step forward in life, given the forces that have conspired...

WHERE ARE THEY NOW

From time to time I am asked where the film cast of JCS is now, and what projects they are currently involved in.  With the latest in those requests coming yesterday (4/4/04) from Alex, I have decided to add a section addressing the question to this page.  Check out the latest with the most notable cast members below:

These last 2 masterpieces that Maribel sent have got to rank as my all-time favorite shots of Ted from the JCS film.  I've tried to get this image on film for years, unsuccessfully, I might add.  I've asked Maribel to see if she can get this shot off the regular VHS, as widescreen cuts off a lot of heads (my one pet peeve with that particular version of JCS - or any other film, for that matter), but here are the gorgeous shots she did send me now: 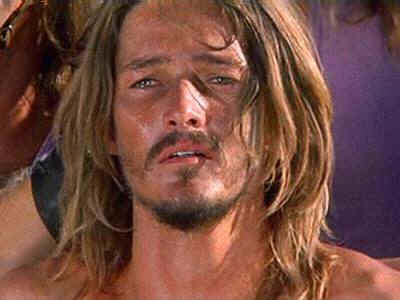 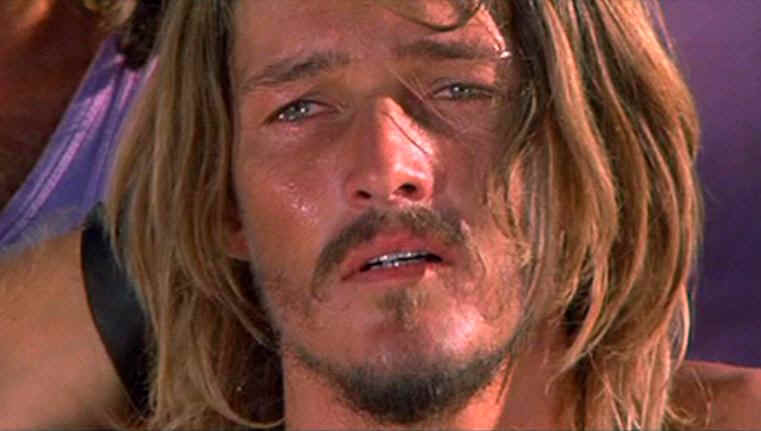