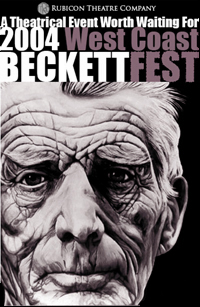 RTC is doing a really amazing festival featuring all 19 of Beckett's plays onstage and/or on film.  The festival runs from September 18 - October 3, 2004.  "Waiting For Godot" (Ted's latest outing - which opens on 9/2/04) is part of this festival.  I will be helping to house manage during this festival (thanks SO MUCH for the opportunity, Karyl Lynn), and I will let all of you know what it was like, and how Ted is - while I am there, if I can use a computer, or when I get back if I don't get the chance.  Below are articles from Insidevc.com and Santa Barbara News-Press that talk about this great event, and the Backstage 9/1/04 preview, as well as the calendarlive listing in the 9/3/04 LATimes, the 9/8 & 25/04 LATimes Reviews, the Santa Barbara News-Press Review, the 9/16/04 Whittier Daily News review, and the listing on the Barkerductions website: 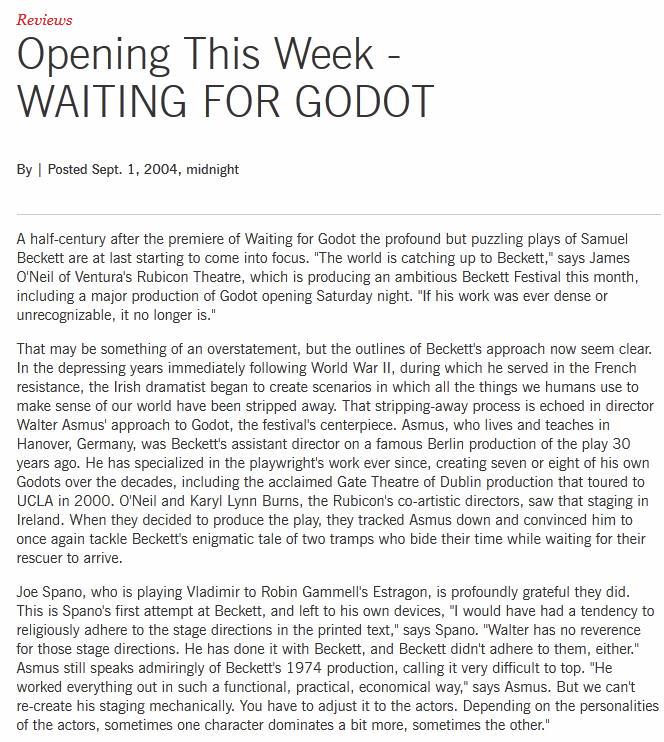 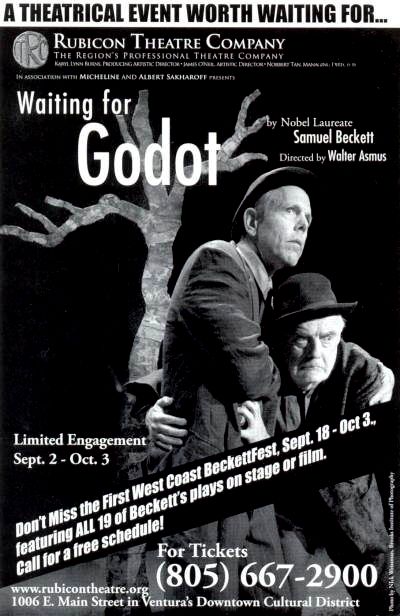 ItÆs September already and letÆs welcome in the initial offerings of LA theatreÆs fall season. There were musical treats galore that made the summer quite a pleasant one, so itÆs been a nice change of pace to attend a bevy of serious dramas in the last several weeks.

On the Pasadena Playhouse stage is Nicholas WrightÆs Olivier Award-winning Best Play of 2003 Vincent in Brixton directed lovingly by Elina de Santos. What a shame to witness people walking out of this beautifully written and soul-searching piece about what influenced Vincent Van Gogh to become a great painter. Inexcusable behavior by Los Angelenos! Are they trying to prove once and for all what outsiders say, that they wouldnÆt know what constitutes culture if it hit them? Wright very carefully does not stray from the bleak story of a widow (Stephanie Zimbalist) that not only experiences a complete and unexpected love once again but who genuinely cares about nurturing talent. My only complaint about this production is Graham Miller who plays Van Gogh. His Dutch accent is very unfocused, making it exceedingly difficult to comprehend him in the opening scenes. Soulful work comes from the underrated Zimbalist who to me is consistently developing into one of our finest American stage actresses. Delightful comic relief from Tracie Lockwood as the puritanical sister bent on cleaning up every mess she sees and gorgeous English country kitchen set by John Iacovelli. Through September 19. By the way Zimbalist and her dad Efrem Zimbalist Jr. will be playing Hannah and her grandfather in the RubiconÆs production of The Night of the Iguana in October.

Until then audiences will be divided over the RubiconÆs current offering of Samuel BeckettÆs Waiting For Godot. You either love it or you despise it! IÆve never been thrilled by existentialism, but I must admit I came away from this production thinking more than ever about the plight of mankind and what I can do to make a difference. If Estragan (Robin Gammell) and Vladimir (Joe Spano) are æstuckÆ expecting to be saved, then isnÆt Beckett trying to tell us to wake up and smell the roses? Life can only get better if we put on our creative hats and attempt to make beneficial changes. Nobody will do it for us! Great work from Spano, Gammell and especially Ted Neeley as Lucky (a very painful role physically) and Cliff DeYoung as Pozzo. This kicks off a month-long Beckett festival in Ventura, which is a first for the West Coast. Kudos once more to KL Burns and Jim OÆNeill for their progressive vision and undying spirit. Through October 3. 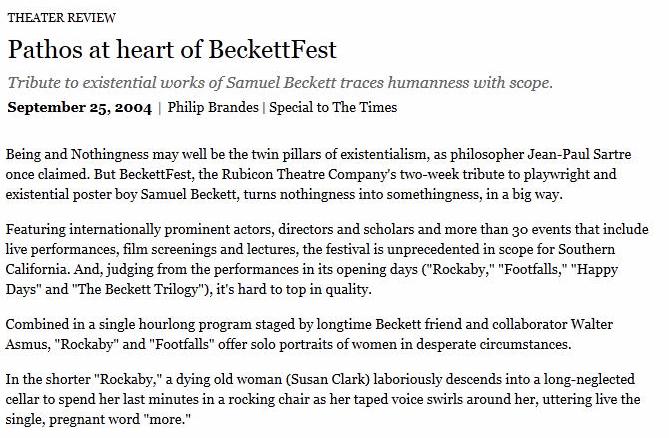